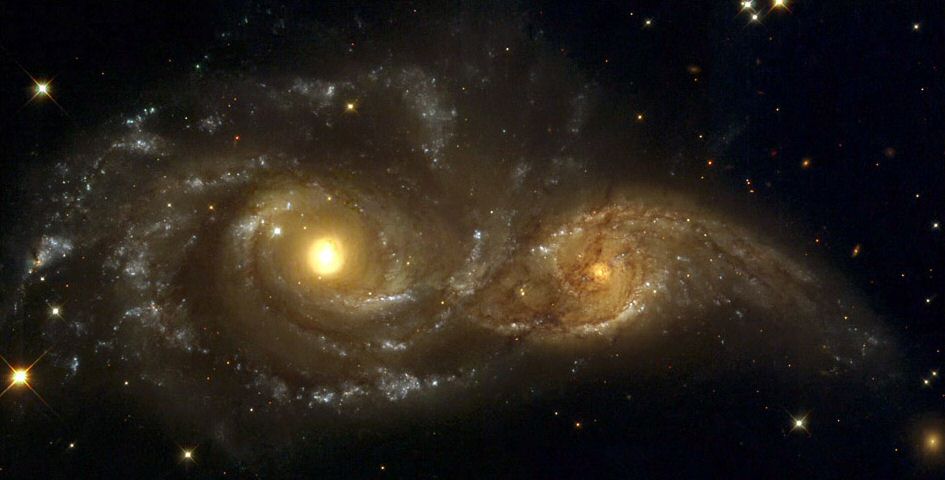 Galaxies collide and interact occasionally and there are several well-known examples in the vicinity of the
Milky Way. We see interacting pairs as snapshots in time and the results are often very dramatic.
Long streams of stars thrown off in beautiful open spiral patterns are characteristic of these collisions and
are known as tidal tails and bridges because of their origin in the strong mutual gravitational tides of the
two interacting galaxies. Colliding galaxies also tend to merge with one another, and the final outcome after
some violent convulsions lasting a few hundred million years is another kind of galaxy called an elliptical.
During this period, the gas in these galaxies can be ignited violently in a starburst creating stars at rates
hundreds of times greater than normal. Galaxy interactions are not that common an event in the local
neighbourhood (maybe one in a hundred galaxies) but the rates of merging and interaction increase
dramatically at early times in the universe. Galaxy merging is fundamental to building up structure
in the universe and explains many of the peculiar features of young galaxies
seen by the Hubble Space Telescope.
John Dubinski

Believe it or not ~ our own Milky Way is set on a collision course
with our neighbouring galaxy Andromeda...
You will find more information on this if you continue to the next page