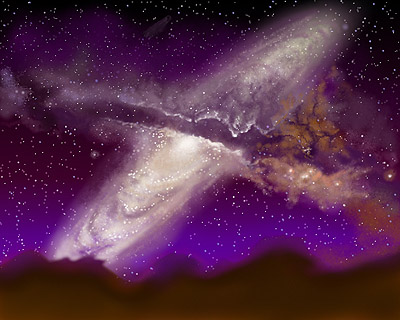 Artist's impression of the collision
between the
Milky Way and Andromeda
(it will most certainly not look like this, but the picture is nevertheless wonderful, I think..)

The Milky Way and Andromeda galaxy are on a collision course!
In about 3 billion years, the two galaxies will collide and then over about 1 billion years,
after a very complex gravitational dance, they will merge to form an elliptical galaxy.

The Milky Way
Our home galaxy, the Milky Way, is a collection of about 400 billions stars spread out in a thin disk
more than 100 000 light year across. Our sun is one of those stars sitting about midway out in the disk
moving around with the others on nearly circular orbits. The Milky Way would look like an average
looking spiral galaxy if we could see it from the outside.

Andromeda
The nearest big spiral galaxy to the Milky Way is the Andromeda galaxy.
Appearing as a smudge of light to the naked eye in the constellation Andromeda,
this galaxy is about twice as big as the Milky Way but very similar in many ways.
At the moment it is about 2.2 million light years away from us but the gap is closing at 500 000 km/hour.
Andromeda is the only big spiral galaxy moving towards the Milky Way and the best explanation is that
the Milky Way and Andromeda are in fact a bound pair of galaxies in orbit around one another.
Both galaxies are thought to have formed close to each other shortly after the Big Bang,
initially moving apart with the overall expansion of the universe.
But since they are bound to one another, they are now falling back together,
and one very plausible scenario puts them on a collision course in about 3 billion years...
credit to John Dubinski