I thought I'd better warn you, not that something touches your head,
you hit it and knock XARAX down.
He would not take kindly to such treatment, believe you me!
Xarax belongs to the species of the Exax Demons.
Exax Demons' language is a rather complicated one to pronounce,
because every word in the Exax language has to have at least on X in it.
"Feed me" for example, would translate into this "Xaxexarix xo ixgrax!"
I am slowly getting the hang of it, but it is difficult at times,
and Xarax has bitten me more than ones,
because I messed up the words and must have told him to chew my arm..
Another problem with Exax Demons is their size.
Once fully grown their wingspan can reach anything up to 18meters,
which will cause me some concern,
because I only have 20MB storage space available.
Once Xarax reaches adulthood,
I will probably have to upgrade and pay for my hosting service here..
But once you have committed yourself to a demon,
there is just simply no turning back.
Demons are for life - not just for Halloween!
(Upgrade done - Xarax you can grow as big as you like now *s*)

Well, you can not really call this a bed, can you?
It's more Xarax's favourite sleeping position..
Which is rather odd, because Exax Demons usually
do not sleep hanging up side down. They sit all huddled up
with their wings used as a blanket.
The fact that Xarax prefers to sleep up side down
has me strongly suspecting that one of his ancestors
must have had a fling with a vampire at some point...!
That is rather unusual, because demons and vampires don't
mix all that well (at least not when it comes to matters of the heart..)
But then again - what can be known about demonic love?
Doubtful anybody would survive long enough to observe it...

You would think now, due to his appearance,
that Xarax has to feel the happiest among dragons,
but be surprised (I was!) he actually prefers the Fairies.
Xarax likes fairies - raw or cooked - he does not care.
He has already escaped a few times, and I always knew where to
find him. The good thing in all of this is, that hell designed Xarax
(and with him all Exax Demons) not for hunting small, quick prey.
Exax Demons hunt big, rather sluggish creatures
(very dangerous ones, though, read Xarax's Favourite Food..)
The fairies are therefore safe from him, but it is
good exercise for a flying demon who has still a lot
of growing to do!
The fairies find it actually rather funny when he comes after them.
They tease him and sprinkle him with fairy dust until he starts sneezing.
(All demons are allergic to fairy dust!) 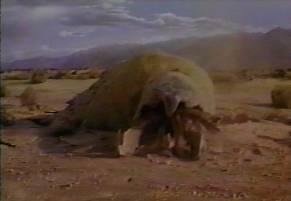 Now this is a real difficult one, because Exax Demons are
Tremor Worm hunters. Unfortunately, these days it has
become near enough a mission impossible to get hold of Tremor Worms.
Kevin Bacon and cohorts have done such a good job killing them,
that it is dreadfully hard to get hold of this particular worm species.
I did find a black market source, but I have to keep it a secret
due to the big demand of Tremor Worms, and I don't want to see Xarax starve.
((Rumour has it, that even the Pentagon is chasing after
the tremor worm to use them in a desert warfare program.))
I do not have to mention, that Xarax will only hunt baby Tremor Worms at the moment, do it?
Because he is still just a baby himself, grown Tremor Worms
are off limit, but I already fear the day when he will demand
the big ones, and I will have to set them lose in MY LAIR!
(If you should wander how Exax Demons hunt Tremor Worms -
they pick up big rocks, fly up in the air with them, drop them, and
when the Tremor Worm surfaces - gotcha!)

to return to former page
or use browser's back button

As with all demons, patience is a must.
You can just not expect a demon to behave in a manner suitable to join the jet set.
The moment you adopt a demon you will have to say good bye to probably quite a few of your friends, who will - after having been bitten twice hard - never return to visit you again. Do not blame your demon for that! It's your former friends fault for wanting to have your demon sit on their laps in the first place! Demons are no cuddle pets for the faint hearted. You will probably lose one or more fingers, a nose, an ear maybe, half of your scalp - there is just no saying how many parts of your body will have to be sacrificed for the pleasure and the honour of living in the company of these adorably nasty monsters!