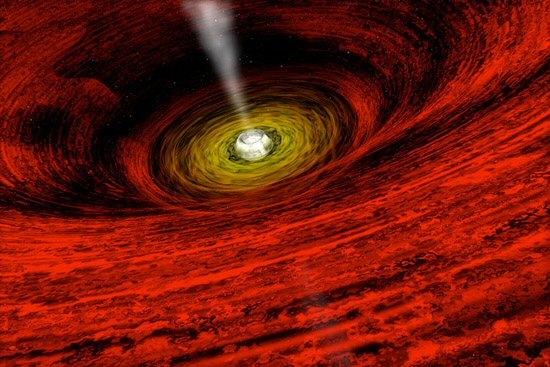 Above: X-ray telescopes like the Chandra X-ray Observatory can detect the fiery glow
from super-heated gas swirling into a black hole.

(article)
A black hole is an object both so massive and so compact
that not even light itself can escape its staggering gravity.
For decades, theorists have argued that giant stars
(ones at least 10 times as massive as our Sun)
routinely end their lives as supernovas -- catastrophic explosions that spray matter
light-years through interstellar space, leaving behind only a dense remnant of the original star.
If the remnant exceeds about 3 solar masses, it will become a black hole.
(end article)

(article)
In 1974, British astronomer Sir Martin Rees proposed that supermassive black holes - ones with
a million or even a billion solar masses - might exist within the centers of some galaxies.
The galaxies he had in mind have impressively active nuclei (centers) that shine as brightly as 30 billion
or more Suns. They glow, unsteadily flickering, at all wavelengths from radio to gamma rays,
and they spew powerful jets of charged particles into space.
Rees reasoned that black holes gobbling matter were the sources of such turmoil.

"There's no other way we can think of that active galactic nuclei (AGNs) could put out so much energy,"
says Donald Kniffen, Chandra program scientist at NASA's Office of Space Science at NASA
headquarters. "The only accepted theory is black holes." Furthermore, there's a dawning awareness that
active galaxies aren't the only ones that might harbor such "monsters in the middle."
Ordinary galaxies like the Milky Way have them, too..

In 1974, even as Rees was speculating about black holes in active galaxies, American radio astronomers
Bruce Balick and Robert Brown were observing the relatively quiet center of our own galaxy.
There they discovered a compact and variable radio source that looked much like a faint quasar -- a type
of far-away AGN that astronomers normally find near the edge of the observable Universe.
But this object was "only" 26,000 light-years away, in our own cosmic backyard!
Because it appeared to be inside a large, extended radio source already known as Sagittarius A,
they named it Sagittarius A* (pronounced "A-star").
(end article)