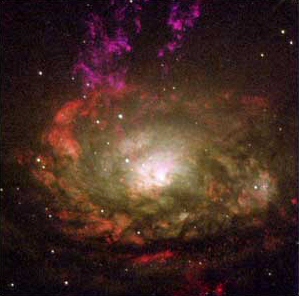 (article)
Resembling a swirling witch's cauldron of glowing vapors, the black hole-powered core of this 'relatively'
nearby active galaxy appears in this colorful NASA Hubble Space Telescope image.
The galaxy lies 13 million light-years away in the southern constellation Circinus.

This galaxy is designated a type 2 Seyfert, a class of mostly spiral galaxies that have compact centers and
are believed to contain massive black holes. Seyfert galaxies are themselves part of a larger class of objects
called Active Galactic Nuclei or AGN. AGN have the ability to remove gas from the centers of their
galaxies by blowing it out into space at phenomenal speeds. Astronomers studying the Circinus galaxy
are seeing evidence of a powerful AGN at the center of this galaxy as well.

Much of the gas in the disk of the Circinus spiral is concentrated in two specific rings — a larger one of
diameter 1,300 light-years, which has already been observed by ground-based telescopes,
and a previously unseen ring of diameter 260 light-years.

In the Hubble image, the smaller inner ring is located on the inside of the green disk.
The larger outer ring extends off the image and is in the plane of the galaxy's disk.
Both rings are home to large amounts of gas and dust as well as areas of major "starburst" activity,
where new stars are rapidly forming on time scales of 40 - 150 million years,
much shorter than the age of the entire galaxy.

At the center of the starburst rings is the Seyfert nucleus, the believed signature of a super massive black
hole that is accreting surrounding gas and dust. The black hole and its accretion disk are expelling gas out
of the galaxy's disk and into its halo (the region above and below the disk). The detailed structure of
this gas is seen as magenta-colored streamers extending towards the top of the image.

In the center of the galaxy and within the inner starburst ring is a V-shaped structure of gas.
The structure appears whitish-pink in this composite image, made up of four filters.
Two filters capture the narrow lines from atomic transitions in oxygen and hydrogen; two wider filters
detect green and near-infrared light. In the narrow-band filters, the V-shaped structure is very pronounced.
This region, which is the projection of a three-dimensional cone extending from the nucleus to the
galaxy's halo, contains gas that has been heated by radiation emitted by the accreting black hole.
A "counter-cone," believed to be present, is obscured from view by dust in the galaxy's disk.
Ultraviolet radiation emerging from the central source excites nearby gas causing it to glow.
The excited gas is beamed into the oppositely directed cones like two giant searchlights.

Located near the plane of our own Milky Way Galaxy, the Circinus galaxy is partially hidden by
intervening dust along our line of sight. As a result, the galaxy went unnoticed until about 25 years ago.
This Hubble image was taken on April 10, 1999 with the Wide Field Planetary Camera 2.

The research team, led by Andrew S. Wilson of the University of Maryland, is using these visible light
images along with near-infrared data to further understand the dynamics of this powerful galaxy.