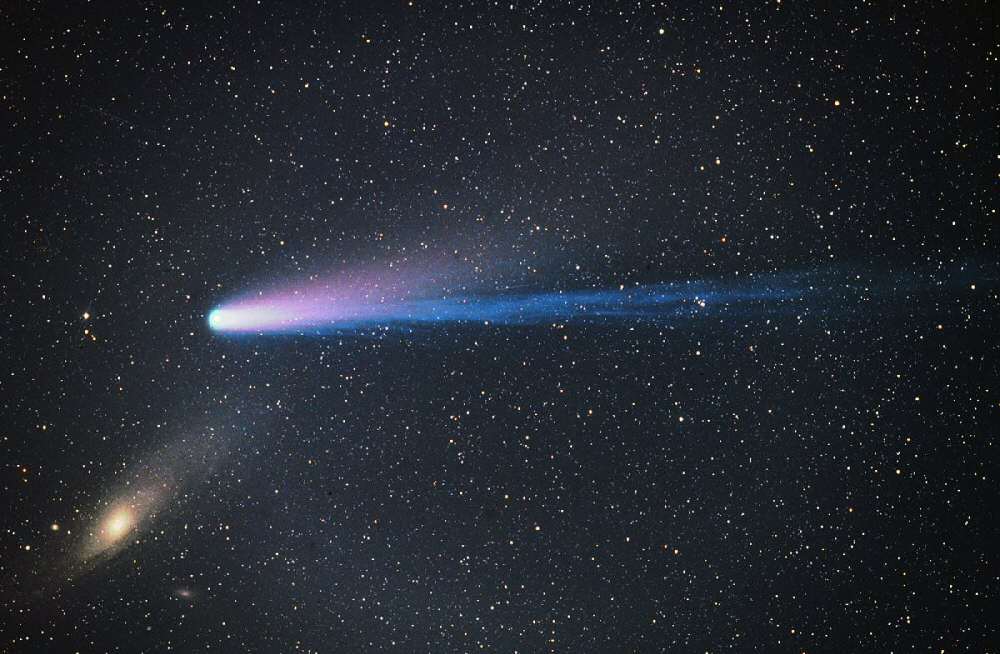 What a wonderful picture of a comet traveling through space..

(article)
Unlike the other small bodies in the solar system, comets have been known since antiquity.
There are Chinese records of Comet Halley going back to at least 240 BC,
and the famous Bayeux Tapestry, which commemorates the Norman Conquest of England in 1066,
depicts an apparition of Comet Halley.

As of 1995, 878 comets have been cataloged and their orbits at least roughly calculated.
Of these 184 are periodic comets (orbital periods less than 200 years); some of the remainder are no doubt
periodic as well, but their orbits have not been determined with sufficient accuracy to tell for sure.

Comets are sometimes called dirty snowballs or "icy mudballs".
They are a mixture of ices (both water and frozen gases) and dust that for some reason didn't get
incorporated into planets when the solar system was formed.
This makes them very interesting as samples of the early history of the solar system.

When they are near the Sun and active, comets have several distinct parts:

nucleus: relatively solid and stable, mostly ice and gas with a small amount of dust and other solids;
coma: dense cloud of water, carbon dioxide and other neutral gases sublimed from the nucleus;
hydrogen cloud: huge (millions of km in diameter) but very sparse envelope of neutral hydrogen;
dust tail: up to 10 million km long composed of smoke-sized dust particles driven off the nucleus by
escaping gases; this is the most prominent part of a comet to the unaided eye;
ion tail: as much as several hundred million km long composed of plasma and laced with rays and
streamers caused by interactions with the solar wind.

Comets are invisible except when they are near the Sun.
Most comets have highly eccentric orbits which take them far beyond the orbit of Pluto;
these are seen once and then disappear for millennia.
Only the short- and intermediate-period comets (like Comet Halley),
stay within the orbit of Pluto for a significant fraction of their orbits.

After 500 or so passes near the Sun off most of a comet's ice and gas is lost leaving a rocky object very
much like an asteroid in appearance. (Perhaps half of the near-Earth asteroids may be "dead" comets.)
A comet whose orbit takes it near the Sun is also likely to either impact one of the planets or the Sun
or to be ejected out of the solar system by a close encounter (esp. with Jupiter).

Many comets are first discovered by amateur astronomers.
Since comets are brightest when near the Sun, they are usually visible only at sunrise or sunset.
(article end)