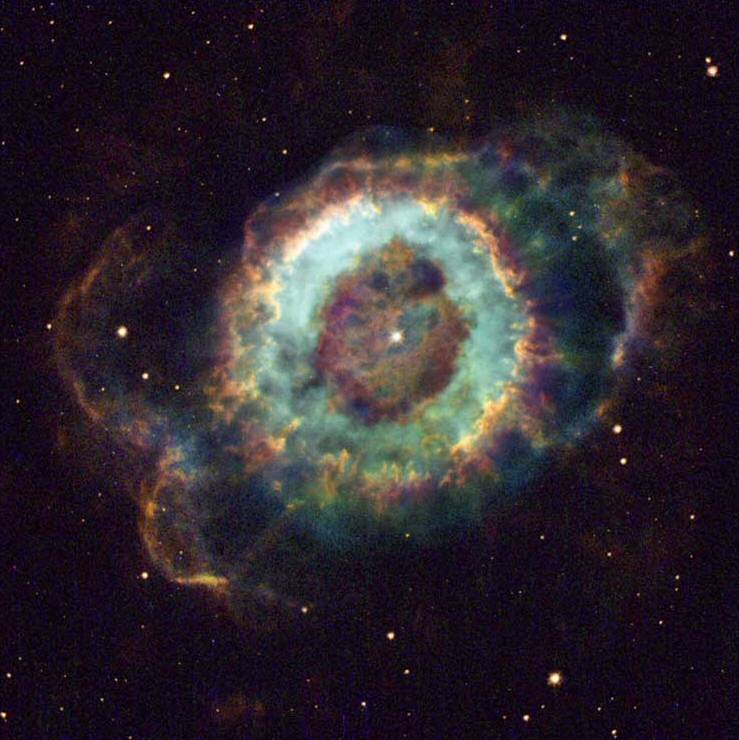 What is a Planetary Nebula?
A planetary nebula forms when a star can no longer support itself by fusion reactions in its center.
The gravity from the material in the outer part of the star takes its inevitable toll on the structure of the
star and forces the inner parts to condense and heat up. The high temperature of the central regions drives
the outer half of the star away in a strong stellar wind, which will last for a few thousand years.
When the process is complete, the remaining core remnant is uncovered and heats the now
distant gases and causes them to glow.
Despite the name, these objects are totally unrelated to "planets".
It is commonly thought that they may represent the final episode of our sun's existence as a star too...
But this concept has been recently questioned by Jacoby, Fullton, Morse, Kwitter and Henry ( 1997) and
Bond (2001) - wherein evidence from globular cluster stars indicates that stars must be about 20% heavier
than our Sun to form a 'PN'. It is estimated that there are about 10,000 planetary nebulae in our galaxy,
so they are a relatively common, but considering a planetary nebula will only last for about 25,000 years,
this is only a very short lived phase in a star's life cycle..

But as long as one does last ~ I think it is one of the most beautiful spectacles
one can ever wish to witness!